The purpose of the Biodigester is multidimensional. The one at Ban Xai was conceived before electricity was in the village so the main reasons were to provide methane gas for cooking and heating, to save firewood, to provide an alternative to having unhealthy smoke filled houses and to provide the “liquid gold” (the processed manure) for the garden.

Gas from the MiVAC biodigester wasn’t getting through to the MiVAC Kitchen. At first we thought it was the gas escaping from the lid however Bill Edwards, (MiVAC’s Jan – Feb 13  Supervisor at Ban Xai) did a great sealing job on lid of the Biodigester. The designer of the Biodigester, Peter Moroney, first advised in Feb 13 to look for a substantial leak in the connecting pipeline from the Biodigester to the Kitchen.

In September under Matt Pittendreigh’s supervision at the farm the gas line to the kitchen was dug up and “voila” a 2.5 cm split was discovered in the line at the point in the picture. In Matt’s words “Yes I can confirm that there was a one inch cut which I believe was caused by a strike with a shovel blade. The damaged section was removed, however I still noticed some gas leaking from the connectors used when placed underwater to test for leaks.” As a result of some leaking at all the screw on connectors in the black polythene piping the whole line was replaced with a proper gas line. In this process a further split was found (– see photos –) however it is not certain whether this split was caused during construction or in dismantling and replacing the line.

So, to anyone who is contemplating building a substantial biodigester please make sure that all your gas lines are delivering gas without leaking. It will will save a lot of time – later!

Whether we use the biodigester in the future is debatable. (We understand that many biodigester systems are used purely for the processed manure and do not use the gas produced). All the villagers in Ban Xai have electricity, MiVAC does not have pig manure to process and if MiVAC buys in cow manure it can be used in various forms of compost for the market garden which is now watered during the dry season. 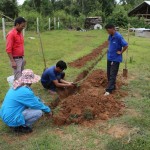 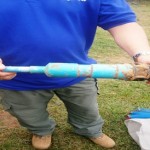 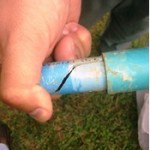 Briefing on Progress at Ban Xai