MiVAC became involved in the reconstruction of Jesu Ashram in 2005. Located at Dutch Bar, near Batticaloa, in Sri Lanka, the orphanage now shelters about 24 girls. In 2004, there were two orphanages sheltering about 50 children, a result of over 20 years of ongoing civil war.

Batticaloa (pronounced Batty ka low) is located on the central east coast of Sri Lanka approximately 270 Km (eight hours drive) from Colombo. After the civil riots of 1983 many Tamils (the ethnic minority) from Colombo sought refuge and resettled among the predominantly Tamil population of Batticaloa.

Later, heavy fighting between the Liberation Tigers of Tamil Eelam (LTTE or Tamil Tigers) and Sri Lankan military caused the deaths of over 17,000 LTTE and more then 60,000 civilians on the east coast alone. (Numbers of Sri Lankan military dead in this area are unknown.) A ceasefire agreement in 2002 enabled the LTTE to move about freely unarmed. Today Batticaloa is heavily patrolled by the Sri Lankan Army and Police Force. Although shootings are frequent, fighting has stopped.

Landmines around the area have been cleared by MAG (Mine Action Group) and no longer present such a serious threat. By mutual agreement the LTTE and Government have ceased the indiscriminate sowing of mines and now only lay well marked mine fields around military bases. The local population are aware of these areas and keep well away.

On 26th December 2005, the Asian Tsunami devastated the coastal region of Batticaloa district. Between 6000-8000 people were killed. The inaccuracy of the casualty statistics provide some insight into the scale of the tragedy. Many villages were completely washed away with no survivors to provide accurate figures. The Dutch Bar, a large sand bar that juts into the sea and forms a beautiful salt water lagoon between the town centre and coast, was particularly affected. Many of those not killed by outright by debris were washed into the lagoon and drowned.

Because Batticaloa was an area of complex conflict, much more of the effort of the International NGOs was focused elsewhere in Sri Lanka.

After learning of the devastation to the communities in this war affected area, The MiVAC Trust sent Sri Lankan Australian members, Brendan Boucher and David Mariadason to meet with local government, community leaders and NGOs to conduct a feasibility study and plan a re-construction project. The Government of Tasmania had invited MiVAC to apply for Tsunami relief funding. MiVAC drafted a proposal and and awaited confirmation from the Tasmanian Government. Drawings, plans, costings and schedules were prepared. In the meantime the situation at Batticaloa was quite desperate. Thousands of displaced people were surviving on food and water rations in temporary camps around the Batticaloa district.

The Batticaloa orphanage was established in the Dutch Bar in 1983 by local organisation, Servants of Jesus, and received funding by the Jesuits. It provides a home, training and a future for children orphaned as a result of the on-going conflict. Before the tsunami, it housed thirty girls and boys between the ages of eight and sixteen. Since May, about 40 were under direct care. It was anticipated that many more children will be admitted as and when the orphanage can erect buildings and facilities to cope with them. The orphanage and the priests serve the wider community, including all faiths, in many ways.

The orphanage was completely destroyed by the tsunami. It was approximately 400 metres from the sea; the force of the surge tore the foundations, breaking the walls and collapsing the roof. The market garden, aquaculture ponds and two sea going fishing boats used for income generation were swept away. The two boats owned by the orphanage can still be seen lying broken on the opposite side of the lagoon. Fortunately, most of the children were away from the orphanage for the Christmas holidays. However the manager and his wife were killed while pushing the few remaining children to safety in a large tree.

Children were temporarily resettled throughout the community because there was no other funding or proposals to reconstruct the orphanage. The Jesuits, under the direction of the Father Joseph Mary, were effective in trying to establish some normalcy in the lives of the community with very little to work with. Through limited funding from the Jesuit Relief Services, Father Joe provided temporary housing, conducted a cleanup of the area utilising heavy equipment, and were the first to commence the construction of permanent housing. There was much left to do and apart from the practical value, reconstruction of the orphanage would provide a focal point for the children and wider community from which hope, re-construction and re-development would spread. The psychological aspect of this to this devastated community can not be underestimated.

Reconstruction of the orphanage fitted with the criteria set by both MiVAC and the donor. The building to be constructed was community infrastructure that will be used in the education and development of the war affected children within the community. The Batticaloa area was subject to landmines, but this threat has been removed. Furthermore the area had been devastated by the Boxing Day Tsunami. The orphanage was not in receipt of relief funding from the Government or major NGOs. The orphanage and surrounding community was in a wretched state and required immediate assistance. By assisting the orphanage directly we also assisted the local community. 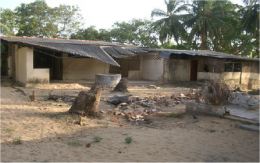 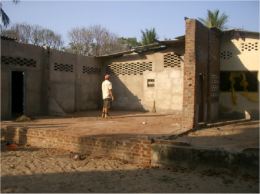 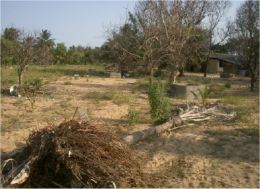 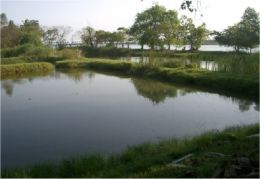 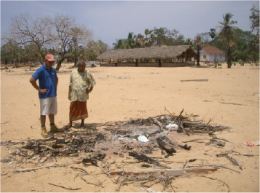 Father Joseph Mary shows MiVACs David Mariadason the site where he found a body under a fallen tree several days after the Tsunami. Note the remains of a house (foundation only) and the local school in the background 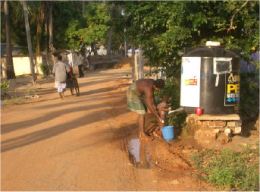 A father washing his son under an fresh water tank 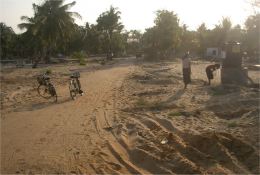 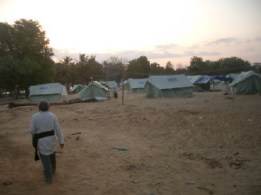 Father Joseph Mary approaching the entrance to one of the many refugee camps located on the Dutch bar, Batticaloa