At the recent presentation of the MiVAC Annual Report John Salter – MiVAC’s Operations Manager in Phonsavan – told the gathering about the IDEXX equipment and what it could do. The next step was to tell the audience about the Ceramic Water Filter (CWF). In the Photo title “the water coming in and the water coming out”  John is showing the test result of the water at the farm coming from the West End Source which was going into the CWF and then the test result of the water once it had gone through the CWF. Quite dramatic actually because it showed the CWF operating really well eliminating the e-coli and all the coliform.

There is no doubt that the IDEXX equipment is “State of the Art”.  It is almost too good. It is easy to operate  and gives a measurement of e-coli and coliform. There are very different ideas of what is potable water throughout the world and indeed the varying levels of coliform that can be consumed by people. A thought is that people can get accustomed to the coliform after a couple of stomach upsets – but what levels?

When John has been testing water he has had coliform readings from water that has been processed through the CWF. This has been put down to contamination – as little as touching the inside of the Ceramic Bowl. Likewise John has had readings of Coliform from the bottled water that is bought by most villagers and indeed by all of us who visit Phonsavan. 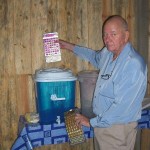 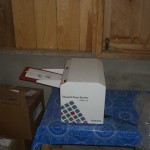 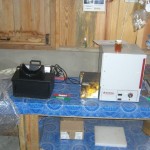 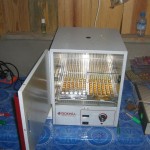 The Pump For the Main Water Supply for the MiVAC Site