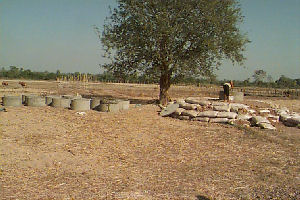 The MiVAC Trust, in conjunction with AusAID, undertook a Village Development Project in Cambodia. Kampi Village is a subsistence fishing and rice farming village comprised of a total of 124 families located in Sombok Commune, Kratie District, Kratie. It is situated along the Mekong River approximately 230 km north from Phnom Penh.

Kratie was the scene of some of the heaviest fighting throughout the various foreign incursions and civil wars fought in Cambodia. The area was heavily bombed by US during that bombing campaign. In addition to the UXOs the surrounding areas were heavily landmined. Over the past few years there has been a major de-mining/UXO effort in the zone, but the number of limbless land mine victims to be seen in the area is testimony to the incident of landmine detonations that have occurred.

For this project, funding was provided by AusAID Phnom Penh under the Community Development Program (CDF). MiVAC’s contribution included the project coordination and supervision by self funded volunteers, along with funding to construct 9 wells.

The project was conducted by The Cambodian Rural Development Team (CRDT): a group of young Cambodians formed by Brendan Boucher. Brendan is a former member of Commando Regt. and a MiVAC member. CDRT was implemented and coordinated initially by Brendan, and Alex Diment (CRDT); later, Mike Roberts assisted.

The project achievements exceeded the initial scope and included the following:

Results and benefits to target population – the direct beneficiaries – the 135 families in Kampi  Village:

The project was part of a larger program with the immediate objective of providing the impoverished communities living along the Mekong with a healthier village environment and a more diverse and sustainable local economy.

The broader aim of the program was to reduce the dependence on the diminishing fish stocks of the Mekong, and among other things, assist in the conservation of the critically endangered Mekong freshwater (Irrawaddy) dolphin. Historically, this village depended entirely on fishing for its livelihood; the use of gill nets and the competition with the dolphins for the diminishing fish stocks have reduced the number of this species to around 80.

This project demonstrated that successful conservation programs must consider the local human inhabitants and provide them the basic skills and means to develop alternative and sustainable local economies, rather than by introducing a law that bans the communities from the  taking of forest or wildlife, the only means of a livelihood that they traditionally have had. A consequence of life in Kampi village is that such a law is un-enforced and un-enforceable.

The program was very professionally delivered by the young Cambodians of the CRDT (male and female) who lived and worked with the community throughout the project duration. CRDT uses the “help them to help themselves” method.  Apart from the initial supply of some materials and livestock, all work is done by the villagers with team members providing training  and guidance. The community has wholeheartedly accepted the opportunity to learn new skills and are now well on the way to a much healthier village environment and more certain food supply, along with the benefits to the community arising from the incomes provided by the surpluses now being produced.

These communities are re-establishing themselves after years of conflict, and uncertainty. They are short on information and the means to break the cycle of poverty; however, once shown and given the basic means and tools, they get on with it themselves, with great enthusiasm. These small village development projects tend to have a multiplying effect.

What the people of Kampi have learned and implemented with our assistance will spread to other small communities when they see the change and improved livelihoods of Kampi. What these people get from this project will be a major factor in ensuring a much brighter future for them all in that region.