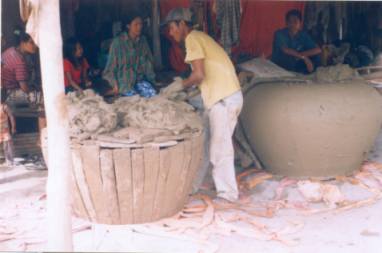 The project was conducted in the village of Tum Nub. Tum Nub is in Stung Treng Commune, Sala Krau District, Pailin, and is approximately 25 Km to the north of Pailin. It is home to 150 families and is typical of many newly settled and impoverished communities within the Pailin region. Sala Krau District is acknowledged as one of the most densely land mined areas in Cambodia. Tum Nub is pretty well in the middle of a very large minefield – the Khmer Rouge were still planting them in 1998, the minefields include all types of mines including anti-tank and the one many of us know so well, the US M16. It will take many years to clear the area.

The Pailin region is one of the most impoverished regions of Cambodia. It was the site of the last fighting between government and Khmer Rouge troops in 1998. The area is still controlled mainly by the Khmer Rouge hierarchy. The politics of the area are complicated.

At the time of our projects, there were virtually no government or non-government agencies actively working to provide assistance for these small and poverty stricken IDP/Refugee communities. This was no doubt due to the continued domination of the area by the Khmer Rouge.

The refugees known in UN speak as Internally Displaced People (IDP’s) began squatting in the area in 2000, many of these people were displaced during the last fighting in 1998, and also many returnees from the last of the refugee camps on the Thai Cambodian Border settled in the region. The people originate from all over Cambodia, and have been shunted from area to area for years, in the main they are rural people and generally unskilled workers.

Now these technically illegal settlements are spread all over the Pailin region mainly in areas that were cleared illegally by loggers some years back. These are also some of the most densely mined areas in Cambodia. These people, who have absolutely nothing, moved into these cleared areas at their own volition attracted by the undeveloped, and what they believed, to be free and open land.

After the transient and hazardous existence they have endured for years, they hope finally to be able to establish permanent communities. They were gradually clearing out the tree stumps, and dead fall timber, and in many cases land mines. They work very hard with few tools to open up the land further and trying to eke out a living growing corn, sesame and soya from the small plots they are able to clear and work. They were often exploited by the local big shots and Thai produce buyers. Such communities as these are fertile recruiting grounds for the people traffickers.

The basic and urgent needs in these places is water (plenty of it about 15-30 metres below them), water storage jars to catch rain, mosquito nets (malaria is killing many each year – mostly kids and the elderly) and hand cultivating tools.

Some of the earlier settlements have now gained “Official Village” status, this gives the residents the right to stay and in some cases they have been given certificates of tenure over the small plots they have cleared and are scratching out a subsistence living, many don’t make it. The status of Official Village does not bring any government assistance and so far very little assistance from the International NGOs. It seems MiVAC is one of the first to provide real and practical assistance in the region.

Hard work, poverty, high incidence of sickness and death along with frequent land mine encounters while working in the fields are their lot. In many cases they do not even have adequate hand tool to clear or cultivate the ground. In the dry season most do not have a reliable source of water of any condition.

They take water from where they can: turbid road pools, creeks, soak and ponds, often these contain high arsenic and other toxic levels. In the dry season many of these dry up so the kids and women must walk up to 12 km to get water from the only available water points. They only have small 10-20 litre plastic drums which they must carry back and forth (small underfed kids are doing it all day without complaint) as it takes several trips a day to meet the basic family needs. They have no bulk water storage at the homes to catch any rainfall.  Most don’t have a decent roof to catch the rain with anyway.  Basically these small settlements have absolutely nothing but very basic shelter and utensils with a few hand tools to scratch out a bit of a cash crop which they sell to buy enough food and medicine to continue another day.

They also do it without complaint because they think they have finally found a place to call home and what they do have is a lot of hope, motivation and endurance. They also have great dignity.

The MiVAC Trust heard about these communities and decided to help. 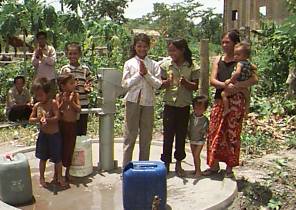 The village of Tum Nub was selected because the village was very remote, the nearest water point was 7 km away and the population includes a higher than usual number of widowed and single parent families. This is due to the high casualties suffered by the men in the fighting of 1998, and more recently landmine detonations and desertions by many of the men who had been soldiers on both sides. The population numbers and size of area made Tum Nub the ideal village to benefit most from the available funding. The village also met the MiVAC funding criteria in that it is a landmine and conflict affected community.

A MiVAC Trust member coordinated the project. Mike Roberts had previously been in the area as adviser to a local Cambodian NGO. With the advantage of local knowledge and the help an extremely competent Cambodian organization called the Cambodian Rural Development Team (CRDT); a very successful project was the outcome.

As a matter of interest, CRDT was set-up and run by another ex-digger and MiVAC member Brendan Boucher. Under Brendan’s very competent leadership they have been doing some great rural development projects, in many cases with funding from AusAid. See: www.crdt.org

After consultation with the village members to determine what they saw as the priorities it was decided to provide some water wells, some bulk water storage jars and with any leftover funds purchase as much building material as possible for the community to construct a small building that could be used as a School and a Community Centre – the nearest was 11 km away. The people preferred that the funds be directed to the construction of the school before the many other basics they need – such is their strong desire to get their kids some basic education at least. In fact they had already stored some timber etc.

Ultimately the MiVAC funds provided this small community with three pump wells, 80 of the 300 litre household water storage jars and sufficient building materials (cement, bricks and roofing) for the construction of a 8 x 15 metre building.

This doesn’t sound like much, but now the women and kids are not spending all day carting water. Still no holiday, but it means that more labour is available to work the fields – the main source of income. They can now establish and develop small vegetable plots to add variety to their diet and some measure of food security, also in time to sell any surpluses. They now have a focal point as a community in the school/community building on which they can re-build their cultural and community identity – this is a very important cultural matter for these people who have been up-rooted and shunted around for years.

Basically they now have a chance to break the cycle of poverty they have been locked in for so long. All in all MiVAC has provided a new life (the villagers’ words) for around 600 people. Before MiVAC left the area the women had established a community vegetable plot at the rear of each well to take advantage of the run off. The produce will be sold and proceeds put into the Well Maintenance Fund MiVAC established. These people had nothing and asked for nothing – all they needed was a bit of a hand and now they will get on with it.