Ban Naxaythong village was the first of the villages for which MiVAC provided running water in Lao PDR.  It is about 25 km north of Phonsavan in Xieng Khouang Province, and had a population of around 1100 people.

There was no running water in the village, so water was either carted in by truck, or village girls and young women would carry 20kg containers of water, uphill, from water sources – which were several hundred metres or more from their homes.

A suitable water source was located, but it was almost 9km from the village.  It was up in a creek in some small hills.  But this meant that the water had to be transported the 9km to the village, including crossing one major creek.

A small dam was constructed in the creek, with two 63mm diameter “poly” pipes carrying water to a small “settling tank”.  The tank had three chambers, and as the water flowed up over one chamber wall and into the next chamber, any suspended dirt would drop to the bottom of the chamber.  (The dirt could later be cleaned out using in-built cleaning lines.)

Then, a 63mm pipe was laid out, connected and buried 300mm below ground level (to prevent ultra violet light degradation) for the 9km to the village.

A 31,000 litre water holding tank was constructed on a small hill near the village, and the water flowed into this.  Water the flowed through a number of smaller pipes to 11 water points located through the village, and with one of these at the school.

At all stages of the project, approvals and design assistance were sought from the District Government offices, and strong relationships were soon developed.

At the end of the work in this village, and once training in maintenance and sanitation, a formal handover ceremony was held.  The Assistant District Governor and village Chief were both very pleased and appreciative of the work we completed.

A 94 year old man came up to me and told me it was the first time the village had ever had running water, and he was very happy.  The women and girls were also very happy, as they now did not have to carry water over those long distances.

The objectives of the project for the were,

These objectives were met, and a subsequent inspection in 2020 showed that maintenance had been undertaken on the pipeline, using village workers and funds from their water maintenance fund.

Funding – provided by grants from Rotary International, as well as from donations received by MiVAC. 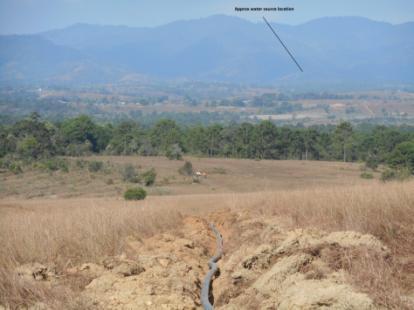 Water source location (see base of black line), as taken from hilltop in Ban Naxaythong. The holding tank will be located on this hilltop 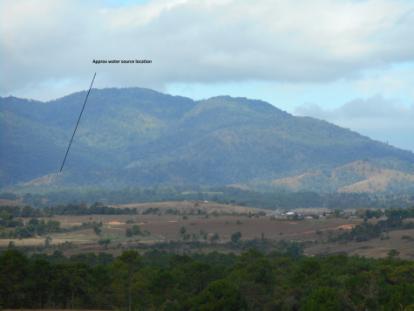 Pipeline heading off into the distant hills 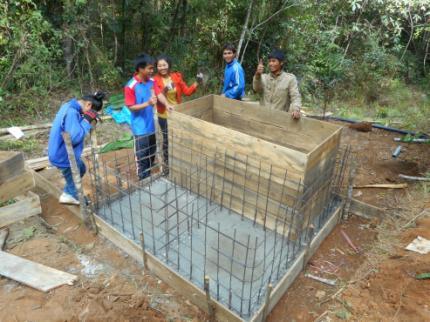 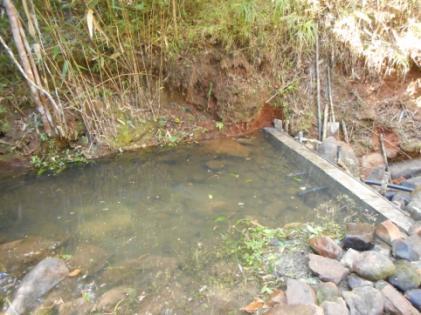 The weir at the water source. Note – two supply pipes used – due to likely supply flow rate to holding tank vs delivery flow rate to village. Inlet filters yet to be installed 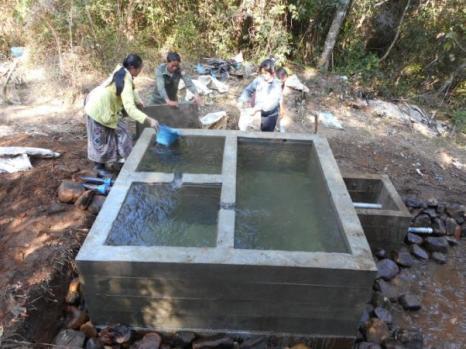 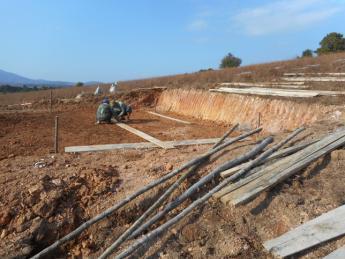 Area for tank excavated – initially by hand, but due to volume (16m3) & soil hardness (very), the villagers paid for an excavator – at no cost to project! 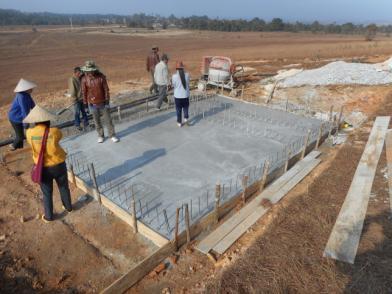 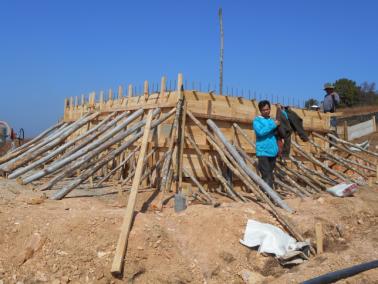 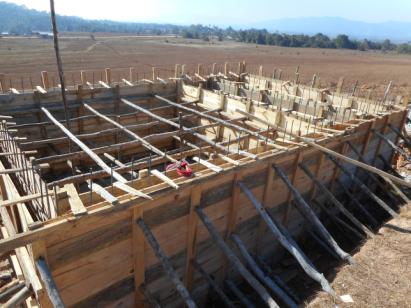 Steel reo tied, and formwork completed. Big job in itself 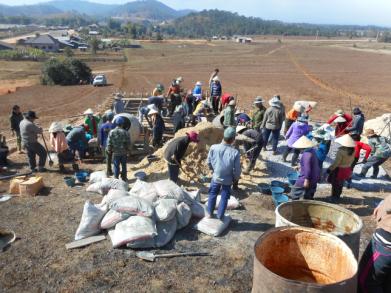 75 villagers really going for it! We poured the concrete walls for the holding tank – 8m3 or 19 tonnes – in 2 hours using spades & buckets, with 2 concrete mixers going – can you believe they were so quick!!! 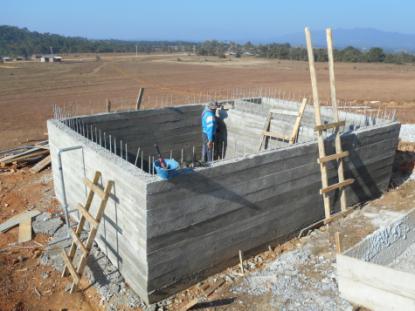 The village Naiban – leading from the front as usual… That’s one BIG tank! 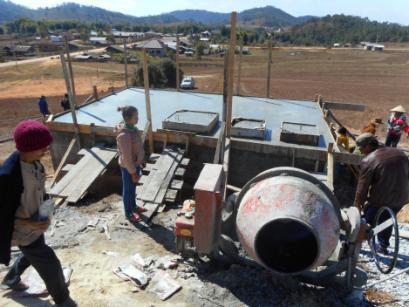 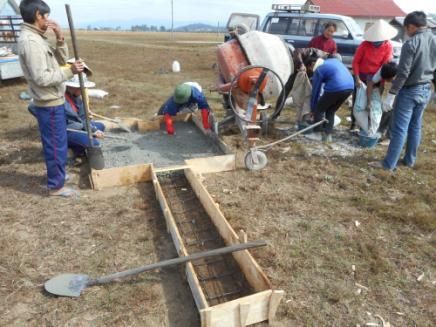 Slab for first water point with first concrete batch in place, with more being mixed. The long “handle” shape coming towards camera is the diverting drain 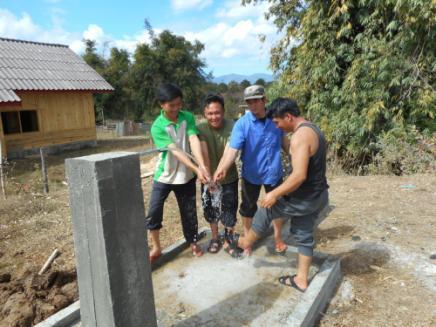 Some happy villagers/workers with first water flowing … Taps to be installed! Large size of concrete column – is to allow for cattle to rub against without damage!! 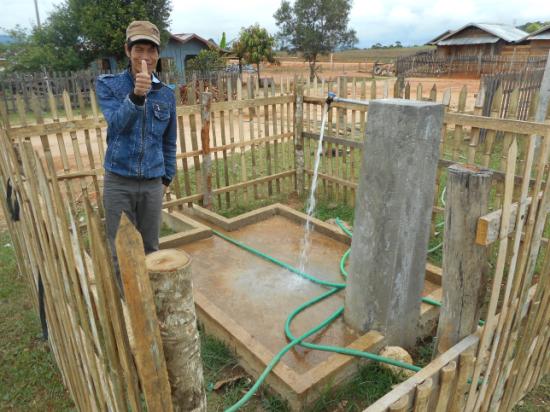 Finished water point – with protective fence. Note the good velocity of water from tap, and also the hoses going to various houses 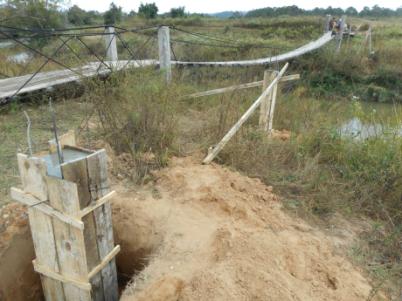 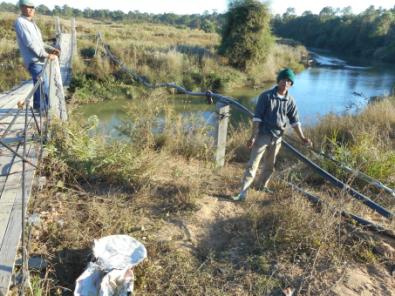 63mm poly pipe in position attached to 14mm steel wire rope (SWR). UV protection for the pipe was provided by cutting lengthwise some 90mm poly pipe, and then attaching the upper half to the top of the 63mm pipe. The coils of both pipes then acted like a spring when released from the bridge, causing the pipe to wrap python like around the cable 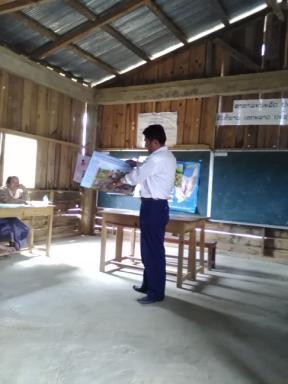 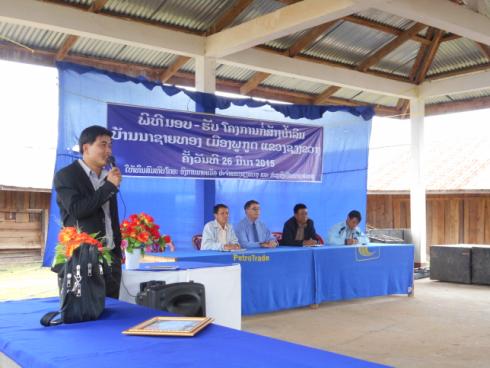 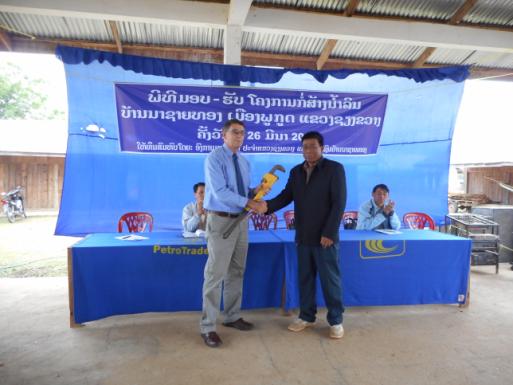 BB handing over the pipe wrench to the DDG 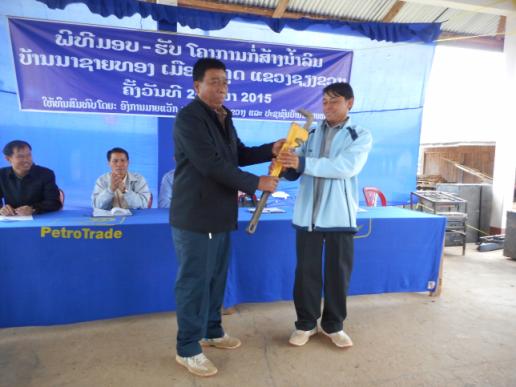 DDG handing the wrench to the Naiban 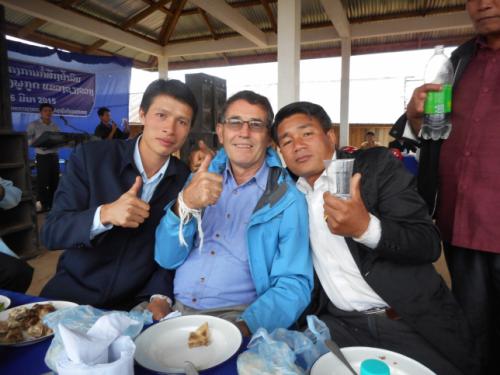 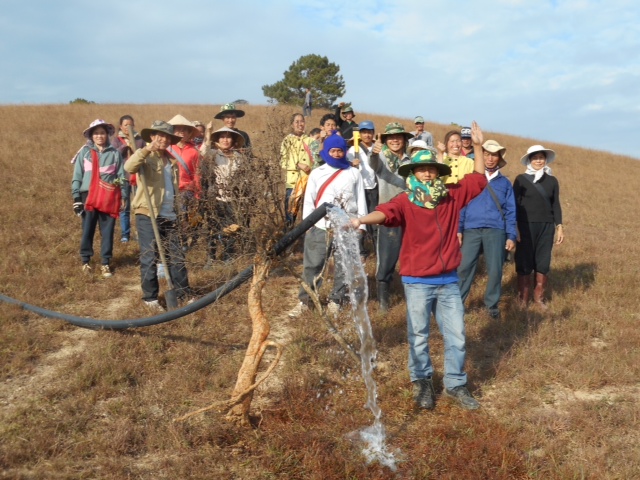 The water arrives in Ban Naxaythong