On Saturday 20th April the residents of West Ban Xai held a function to thank Mivac for the work that has been done by them in providing water and toilets to the village.
The function was attended by Mr Sonsaone . First Secretary to Phoukood District and the district Health Officer Dr. Somdee, Naiban Dan and all the villagers, John and Nui Salter, Peter and Anita Perry and all the Mivac Staff.
It was a formal affair with Speeches of welcome and thanks from Phoukood  and village Officials and a response by John Salter who then, as a symbol of completion of the project and handover of it to its new owners , presented Dr Somdee with the large stilson Wrench required to tighten pipe joins. John was then presented with a certificate of appreciation from the Village.
After the formalities all guests sat down to , first be blessed , then to eat a great spread of local food , all washed down with Beer Lao and white lightening or Rice Whiskey. Whilst eating the villagers then proceeded to all give Sai Sin ( To tie blessed white cord around your wrist) until all arms looked a bit like woolly mammoths. This process took some time but as the hosts kept up the liquid refreshments, the time passed quickly. Towards the end , Mivac followed custom and John gave all attendees a glass of beer in the traditional way  , with one glass and a few bottles of hot beer , a steely gaze to get it down quickly , pour out the dregs and on to the next. The proceedings came to a cool end with the village ladies pouring cool water down the backs of all as a welcome to the New Year.
It was interesting to note that the First Secretary advised all that he still saw some toilet packs , provided by MiVAC, not being used in Pong Hor and was taking steps to have them removed and given to others. He also spoke of the villages responsibility to maintain this new water system  and announced that all houses would pay 2000kip per month into the village water fund to ensure this. This money to be used as directed by the water committee.
Naiban Dan told all that although many had come with promises , MiVAC were the first in a long time to actually deliver , and to him MiVAC meant trust.
John Salter told all that MiVAC were working on a new water filter that would soon be available to all and that the water from this filter could be drunk as is and did not need boiling. This was met with much enthusiasm. 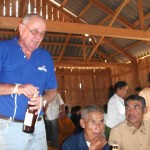 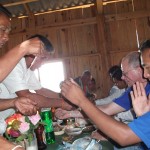 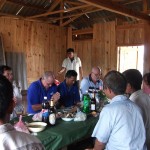 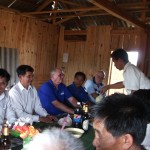 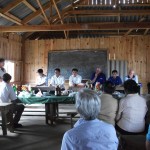 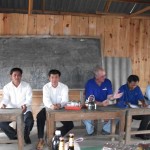 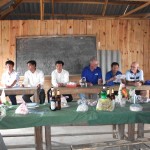 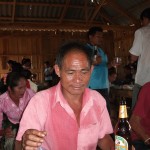