Work to Erase War’s Traces. Thanks to the “The Senior” for their permission to use the following article.

Much of Rob Woolley’s service during the Vietnam war involved finding and destroying land mines, unexploded ordnance and booby traps.

“I’ve seen what minefields can do: Australian soldiers suffered many casualties from landmines,” he said.

“After the war, many land mines and unexploded bombs remained, which pose enormous danger to civilians and livestock.”

Like many veterans, Rob was enormously concerned about the legacy of that war and its impact on civilians – not only in Vietnam but neighbouring Laos and Cambodia as well.

In 2001 he was recognised for his commitment to the International campaign to ban land mines, and in 2002 he founded MiVAC – Mines, Victims and Clearance.

Its purpose is to provide care, including food, clothing, funds or anything else needed to people and communities identified as being victims of mine warfare.

Over the years, the group has been involved in a number of projects in the region, as well as in Sri Lanka. A major project is currently underway at Ban Xai, a village in the northern part of Laos.

The village’s 700 inhabitants were identified as having no clean water, toilets in only half of the homes, no sanitation, no power, two schools with dirt floors and ongoing food insecurity.

The group had been involved in clearing minefields in the region and was asked to help in the development of sustainable village infrastructure to help alleviate poverty.

MiVAC relies on donations and practical assistance from members and supporters, most of whom are retired.

Late last year a group of supporters travelled from Australia to Ban Xai.

The group included renowned playwright Kate Mulvaney, whose own experience as an Agent Orange survivor and her father’s experiences in Vietnam, inspired her much acclaimed work, The Seed.

Also in the group was Castlemaine naturopath Siobhan Collie whose association with MiVAC began at the Castlemaine market when she met honey maker and Victorian group representative Gary Bridgland, who had served in the Navy during the Vietnam War.

“That war had really got under my skin,” Siobhan said.

“I watched older brothers and others I knew go to war and when I got talking to with Gary, he told me about the work of MiVAC.

“Being a musician, I had the idea to stage o fundraising concert.”

The concert exceeded all expectations, raising $12,500, which prompted Siobhan’s visit to Laos in December last year.

She said it was an amazing experience.

“ Laos was the most bombed place on Earth,” Siobhan said. “Between 1964 and 1973 there was a bombing raid there every eight minutes, 24 hours a day.

“Forty years on, the people are still living with it. Thirty per cent of the ordnance there is unexploded.”

“The people in Ban Xai haven’t been able to farm for two generations because of the bombs and mines. All those skills have been lost.”

MiVAC has set up a farm in the region, which employs locals to work the land, earn a subsistence wage and develop productive skills.

“The culture is wonderful – so different from ours.” Siobhan said.

“There were so many touching moments.”

“Like when an 80 year-old man with two club feet and no family to look after him was presented with a blanket by MiVAC to replace a previous one that had been stolen.”

“It really drove home to me just how spoilt we are compared with these people who have nothing.” 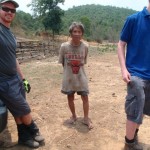 Carol Perks from Save the Children