A traditional Dawn Service was held at MiVAC House Phonsavan at 0530 this morning.

John Salter gave a warm welcome to attendees and then recited the opening prayer. This was followed by the Anzac Day address given by Colonel Dougall McMillan, AO, SC who spoke of the Anzac tradition and  its meaning in today’s society.

Wreaths were then laid with John laying one on behalf of all returned service personnel, Cam Sutherland on behalf of Phu Bia Mining, and Mr. Yang Xang on behalf of the people of Lao.

John Salter recited the Ode, the Last Post was sounded followed by a minutes silence. Reveille was played and the Australian flag raised.

Guests were then invited to partake of a gunfire breakfast cooked by Dougal on the BBQ and rum and coffee were the order of the day. 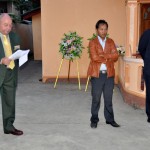 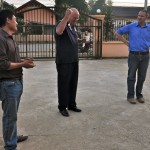 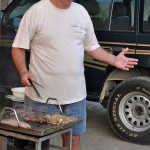 The Bush Fence Didn’t Keep the Cattle Out