As you may know, Steve Carroll, when he was the Site Supervisor, built the new 2-room school at Hinmou Peung (HMP).  The purpose of this was so that the school could teach Years 1, 2, 3 and 4, so that 8 and 9 year old children did not have to go to Ban Xai and stay in the Dorm in order to attend school.

Before a new teacher could come to the school, the class-room needed chairs and desks.  We thought the Villagers would be able to do this with a little guidance.  When Michael arrived, he saw that they were not using the 2nd classroom, because there were no desks and he was told that a teacher would not be supplied until the classrooms were ready.

Michael set about raising funds with his Family and donated the chairs and desks.  Following the installation of the furniture into the classroom, the Phoukood Education Official was invited to attend the official presentation to the school on Monday 12th November 2012.  We understand there was a big party, speeches and the Official was asked for a 2nd School Teacher.  Let’s hope it happens soon.

We arrived at Hinmou Peung at 11am with nothing organised!  No surprises there!  I did present the extra 40 small reading books to the Teacher Ming and 10 of the Broadbeach Rotary club solar lights for the teacher to give to the most appropriate students.  They were left with me by Marilyn Bee during the Rotary visit over a week ago.

We eventually sat down and had a meeting with the village men and the Education Official in the second classroom whilst school was going on next door.  A bottle of village made rice spirit was produced which we all had to have two shots off.  It was even more special because it had very large bees floating in the bottle.  It was actually quite nice if you like neat rocket fuel before lunch on a practically empty stomach!

Not long after a sort of handover/presentation occurred and we all shook hands.  School finished at lunch time and it became clear that we had to wait around until lunch was ready.  Whilst waiting around, a sort of meeting was held and some issues raised by the villagers included getting a bridge over the river, toilets (which Mivac intends providing once we get Department of Health approval for the ones already installed at Phong Hor) and a second teacher.  The District Education official took note of the second teacher requirement and said it would be included in his report.  Some of the men drifted off and others came.  The education official disappeared and Peter also went for a walk.

Eventually we went for a “formal” walk through the village and surprise, surprise we ended up in a young man’s house where the education official and some other young men were eating cucumber and drinking more shots of the locally produced rice spirit (no bees this time!)  Also discovered that in Hmong culture, you drink two shots one after the other as you have two legs!  Sounds a bit tenuous I agree but “when in Rome”.  I did try and count shots but that became impossible after the tenth one!

At about 2.30pm we went to the village Secretary’s house for lunch, except it was not ready until about 3pm, so again the rice spirit raised its ugly head and we all had a few more.  When we finally started eating we had sticky rice, chicken with greens, chicken broth with a marrow type vegetable, and a chilli/pepper/chicken offal dip for the sticky rice.  Again, a very nice meal and more rice spirit and Beer Laos shots!!

Yang asked if I was ready to go and I said whenever it was polite to leave, we should go.  As Yang started to arrange our departure, the teacher Ming advised that we were invited to his house for a drink and a meal!  Yang did try to excuse us from another meal, but it was not to be.  So off we went to the teacher’s house where we had a nice chicken meal that his wife had whipped up.  At least it was more or less ready so we were not there too long, but had to have a couple of more shots!

So we finally departed some five and a half hours after we arrived, with too many shots under my belt from what was a progressive lunch, Hmong style.  Fortunately I was able to convince the villagers that as Yang was driving he had to limit his alcohol intake.

I then had a quiet night; no dinner required and fully expecting a thumping hangover in the morning. 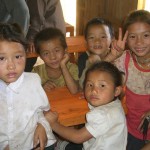 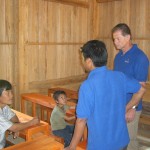 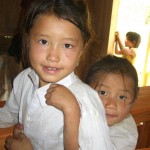 My Dream For the Primary Children of Phoukood District, Lao PDR