The digester is delivering water to the overflow reservoir and this afternoon ran from the overflow pipe we will continue to add product and there is no apparent gas emanating from it – yet. We are rethinking the amount and there is about the same volume out as there is in.

Monday the start of another week and our first job is to check on the Biodigester. Thanks to Peter for a calling often (to guide us) lo and behold it has produced gas – Michael will be so proud.

However …….. the biodigester has developed a leak in the same area as before. The lid just is not sealing and every effort to remedy the situation has been unsuccessful. Thanks for the many calls for assistance and we continue every effort to fix it. Several days passed and the repair to the digester was found not been successful. The next approach was to the Phu Bia Mining (PBM) mining Co who kindly offered their assistance. Guess what – they came up with a solution and now the leak has stopped.

Just another different anecdote from Bill Edwards, MiVAC’s Site Supervisor, he says “we are constantly amazed at the ingenuity of the local folk. Mr No the carpenter was using the hand saw as the power saw blade was unserviceable. It was not cutting as it should and obviously needed setting. Mr No set the saw in the cut he was making and then proceeded in setting the saw with a claw hammer. I could not believe it but it worked. It is clear we waste money on tools which are not needed – try that on your local chippy. 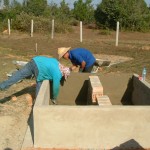 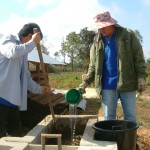 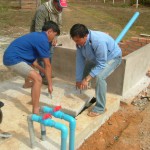 Changes in Staffing at Ban Xai