We have had some celebrations in Ban Xai over the last week.

On Friday 8th November, we were pleased to sign the certificate of Practical Completion for Phase two of the Memorandum of Understanding with the Lao government (Reduction of Poverty).

The formalities of signing over, it was time to celebrate, and this we did in style on the weekend at the remote mountain village of Hinmou Peung.  It was an opportunity for double celebration; the second reason was that a young lady from the village had just won a new sewing machine, donated by MiVAC, for topping her sewing class at the German Technical College. Balloons were distributed to the kids, a pig was roasted, and a bottle or two of Beer Lao was opened.

The photos are, in order: 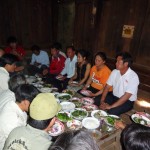 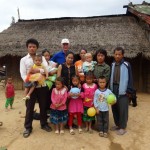 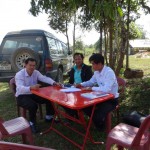