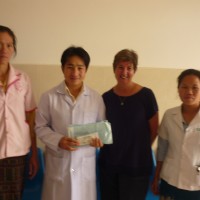 The policeman will be spending his first night in his new house. His day was spent moving furniture and bits and pieces .It all looks pretty good.

We are the talk of the town with the you beaut sprinkling system in place. Several of the town elders have inspected the water sprays and have experienced a bit of a dowsing.

We had a visit from the Naiban (Town Chairman ) to discuss water points . He arrived on his push bike and whilst in deep discussion his pushbike was placed in the middle of the garden rows where he had to retrieve it when leaving, as he was doing so the  sprinkler system was turned on so another good dousing and much hilarity. The Naiban thought it a huge joke.

The watering system provides a drip system to the bananas and three sprays to various points . These of course can be moved . If need be there is enough pressure to have another spray attachment.

Seeds of Bok Choy Cabbage and Cress were planted 3 days ago and with regular watering they are now emerging. So the rest of the garden can now only flourish.

Today a concrete based was laid at the school village in readiness for a storage tank and wash area . The first time the village has ever had water . It should be completed by the end of the week.

The biodigester is producing a limited supply of gas the gas jets on the stove may need reconfiguring to accommodate the lesser pressure.

We ran out of wire to finish the top layer of the chook pen . Two sides are complete. The roost is the “old dunny” with a small yard surrounding and will accommodate a few girls should also be finished by the end of the week.

You may be asking what of the throne , well the throne is now in the BBQ area with a big cushion on top making for a very regal seat. And yes it has been scrubbed with bleach.

I went to the Phoukoud hospital last week and met with the new Doctor who spoke english , the Assistant Director and the Nurse-in-Charge.

We had a great discussion on health issues and I was shown around the hospital which was opened last year.

I am looking forward to returning this week to give them some instruments, a donation from a medical practice where I work.

Now that the water system is working life here has taken on a different timbre ,it’s one of watching the plants grow and then hopefully “smelling the roses’.

Till the next jottings 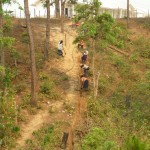 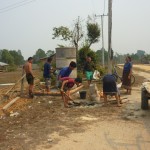 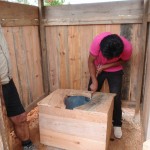