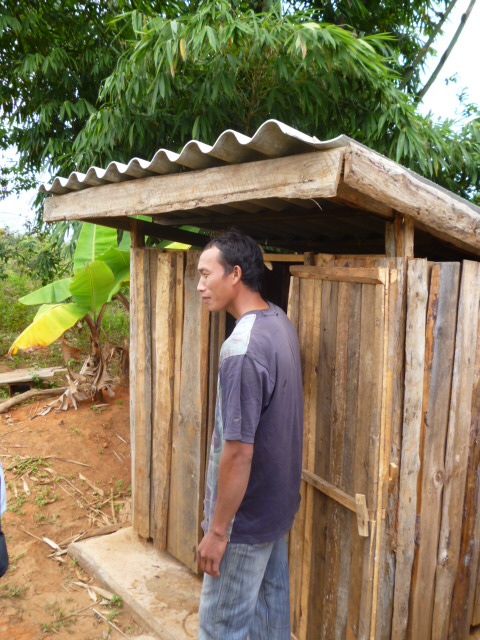 Phong Hor is the Hmong “sub village” at the Eastern end of Ban Xai. There are no toilets there until MiVAC supplied the material to build them. The idea was that that the villagers would install the toilets themselves. This has now been done by the villagers without supervision (it was done during the wet season when MiVAC did not have an Australian Site Supervisor present) however the toilets needed to be inspected before another 63 toilets were to be built in Ban Xai.

Michael Weibler, MiVACs Site Supervisor visited Phong Hor yesterday where the Naiban showed Yang and him four toilets. Generally a good job has been done, except that the villagers had closed off the hole that is used to pump the toilets out when they are full. One also had a timber stopper in the vent pipe hole whilst the other three had the vent pipe correctly installed. It is clear that the villagers do not understand the need for the hole for a pump out when the toilet is full. Michael suggests that MiVAC include in the kit a short length of 150mm PVC with a screw cap lid. The villagers can then be shown how to install it and we can also get them to retrofit the toilets already done. MiVAC would have to supervise this to make sure that all were done correctly.