Ang Village is small community of approximately 150 inhabitants located some 15Km west of Phoukood town site. Access is via a narrow, winding and extremely rough road which becomes impassable during the wet season.

In mid September of this year a torrential downpour in the hills surrounding Ang Village created flash flooding along at least two nearby water courses which caused considerable damage not only to the vegetation along the floor of those valleys, but also to rice paddies at the foot of the valleys.

Of major concern to the Villagers however, was the damage caused to their water supply infrastructure which had only been constructed as recently as 2013. The catchment weir had been completed silted up with sand, gravel and rocks up to 1m in diameter. Fortunately the headworks tank was still intact although the lids had been washed away and the tank chambers had also been silted up. As could be expected the 63mm diameter supply pipe suffered the most damage being broken in several places and tangled spaghetti like mess amongst the storm debris in others.

A request for assistance from MiVAC came from Mr Syamphay of PDPHD Water Section during the final week of September, and a site visit was arranged for Monday 5th October. This inspection happened to coincide with the visit of Peter Perry (and his brother Ivan) to Phonsavan who were able to accompany Moua, Syamphay and Terry Moore on the trip.

The extent of the damage was obvious even before we ventured by foot for 1.5Km along the floor of the valley to the catchment weir. Large trees, boulders and tangled branches were strewn all along the valley floor and tons of finer silt had buried the rice paddies at the foot of the valley.

It was also immediately obvious that these people were in dire need of help. The water supply had been reduced to a collection of temporary hose and small diameter pipes – but of major concern to the villagers was that the school had lost its water supply completely.

A number of villagers had accompanied us on the trek up into the valley, and they were quick to point out the extent of the damage along the way. Surprisingly, their request wasn’t for MiVAC to physically rebuild what they had lost, but only for financial assistance to purchase repair materials such as pipe, cement and reinforcing steel. They simply did not have sufficient funds themselves.

When they further explained that they would travel to Phonsavan to pick up and transport the materials themselves, the decision to assist them became a “no brainer”.

It was fortunate also, that the MiVAC Chairman was on hand to immediately authorize the funding which rather surprisingly, only amounted to approx. $2000! This amount seemed paltry in comparison to the significant impact this event was having on their lives.

To witness the relief and joy from the villagers on learning that yes, we would assist them immediately, is a once in a lifetime experience. As you all know, these are proud, humble, hard working people not normally driven to asking for help. But to ask and receive in the space of a couple of hours was an outcome way beyond their wildest dreams.

Our reward was an impromptu lunch of (freshly slain) chicken and vegetable soup, sticky rice and whisky lao lao toasts! Not to mention the smiles and the handshakes. 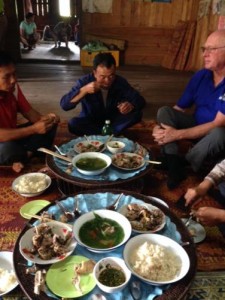 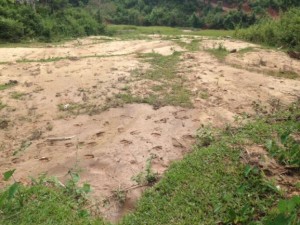 Some of the flood debris 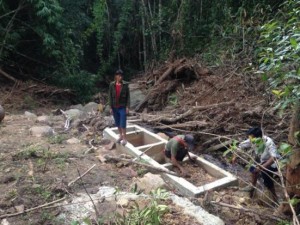 The headworks tank, minus lids 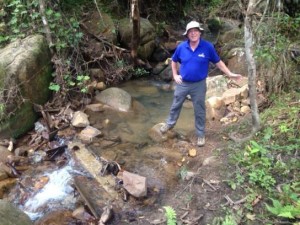 The buried weir (in the foreground) 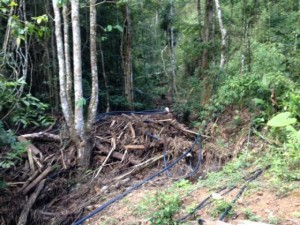 The villagers and the visitors