In 2007 on a backpacking tour of SE Asia, we visited Phonsovan on the usual flying visit; a winding bus trip over the hills, a couple of nights at a guest house, a meal at Nisha’s Indian and Bamboozle and a tour of the Plain of Jars sites and a Hmong village.  Of course we came in touch with the UXO survivor’s centres and it was these visits that sparked our connection when we returned to Tasmania.  Somehow we came in touch with MiVAC and became members – although not “active”.

As our work and home commitments reduced we became increasingly interested in returning to Laos having been back in 2008 for six weeks in the south, riding our bikes from Vientiane to the Cambodian border. We love the country and the especially the people.

So we decided to apply to volunteer with MiVAC, thinking that Malcolm’s agricultural and facilitation background would be useful.  Vicky has been working in her own small business producing jams and chutneys and worked as a library technician and we have spent time travelling through Asia.  So we applied and were accepted for a stint based in Phonsovan or Xien Khuang as it’s more often referred to locally

Unfortunately we were only able to be away for six weeks this time and our dates didn’t quite fit with the changeover from the previous volunteer, Peter Cromarty.    MiVAC chairman Dave Penson came over from Vietnam to fill the gap, which did give us a chance to spend a couple of days with Dave in the changeover and it was good to catch up on developments in MiVAC.

Based on our experience, we feel that volunteers need to spend at least six months in-country to be able to adjust to local culture, to get to know the people and to know how to get things done and to learn to be able to look through Lao eyes.

MiVAC’s next proposed development is a joint project with Rotary to extend basic water and toilet facilities to 9 disadvantaged villages in the Phoukood district.  A Memorandum of Understanding between MiVAC and the Lao PDR authorities must be approved at all levels of government before work commences.  Unfortunately it is a characteristic of most bureaucracies that nothing happens quickly. So much of my time was working with our local Manager Mr Yang to make sure it was progressing and to prepare for a hand over to my replacement Lee Uebergang with his wife Dawn.

This process meant that we did have time to spend with the Seamstresses, five motivated young women who are trying to develop an independent income for themselves and their families.  Starting a small business anywhere is a long term project and unfortunately, the ability to produce an article is the easiest part; it’s getting right the basic principles of efficient production, good management and cost effective marketing and distribution that usually leads to success no matter the size of the operation or the market.

We were able to assist the girls to update their Family Books, a village based Registration system, and get their ID cards so that they could open their first bank account.  We also talked to Ockt Pop Tok , the craft workshop and shop in Luang Prabang that Peter Cromarty had introduced them to, working to improve the quality of the embroidery they do for them.  Vicky also had them producing Lao cotton shopping bags for the local tourist and Australian market in the attempt to get a price premium and some unique product differentiation.

Phonsovan had almost doubled in size in seven years, and as a destination in its own right it doesn’t have the attraction of Luang Prabang or Vientiane, despite being the centre for the major attractions of the Plain of Jars and the remnants from the “Secret War”.  It’s a busy regional town with four markets and local and regional government offices and while tourism is important, the town has an economic life of its own so it’s a good place to get to know everyday life in Lao.  There is a number of NGO’s working in the town and there is an opportunity for greater networking and co-operation.

One of the best ways to get around any town or country is on a bike: we took ours over and used them for local transport, day trips and eventfully a ride through the hills towards Luang Prabang.  Being regularly seen on a bike around town also distinguishes you as a “local” rather than a passing tourist.  With an open mind you can be accepted and included by the locals and can assist in helping the locals improve incomes – for example Vicky encouraged the local baking family to bake wholemeal bread for the tourist and expat market and I drew up some plans for bike touring opportunities for Mr Yang’s tour business.

MiVAC is facing some decisions around the future direction of the Ban Xai base but the work in villages providing water, toilets and electricity are stand–out examples of how relatively small amounts of money can make significant differences to people’s lives through well thought out projects that are evaluated and professionally delivered.

For an insight into Laos society, we recommend people read the Dr Siri series of books set in Lao following the Pathet Lao takeover in 1975 – recently written by Colin Cutterall, the series of 9 books are entertaining and informative.  For a history for the Secret War, read The Ravens by Christopher Robins.

We are happy to talk to anyone interested in visiting Laos or volunteering.  malcolmcowanster@gmail.com, 0417 573 991 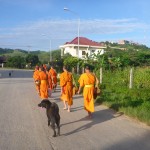 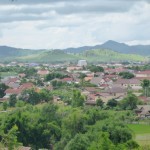