Friends and colleagues of Michael Creighton were saddened to hear of his death in October this year.  Michael had been working in Laos as Operations Manager for Norwegian Peoples Aid Mine Action Program since February 2012, and  was  flying, accompanied by his father, from Vientiane to Pakse  in Laos, when the plane crashed in the Mekong River just before landing.  Both were killed in the accident.
I first met Michael in Hobart several years ago. Michael was involved in clearing landmines, bombs and chemical weapons and has worked in many countries affected by war including Afghanistan, Iraq, and Cambodia. , A former Royal Australian Engineer Officer, later working with aid organisations removing unexploded remnants of war.
Michael was a member of MiVAC and has given us advice on many occasions.  He was a likable, honest character and we appreciated the interest he took in MiVAC.
John Bygrave provided the photograph of Michael taken at the Long Tan Cross during  a trip they took to Vietnam in 2006.
Rob Woolley 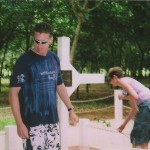