Sorry this is late, I have been dealing with a good mate who has not long to live. He got sick with Cancer while I was away in Laos and the Docs have given him less than 2 weeks from today.

I had the pleasure of working with John Salter at Ban Xai. John is indeed very knowledgeable and experienced in many things particularly South East Asian cultures. I hope he returns, as I have said before, John is a huge asset.

Mr Peng the Policeman is certainly not what one would expect as is definitely not your typical Laos copper. He is the most genuine, down to earth person I have met in a long time. He looks down on nobody and treats all, Falang, Hmong, Meo all the same as far as he is concerned. Top bloke and a damn good cook. I was greeted by his huge smile every morning with a hot brekky of rice, pork, veges and I provided the coffee because I gave him my CamelBak after he told me how far away his village is from Ban Xai and that he rides there. He lives right on the border of Laos/Viet Nam. We had a good arrangement, he taught me Lao and I taught him English. He now is proficient in ordering beers, saying “G’day”  and quoting certain phrases from the movie “The odd angry shot” particularly when it starts to rain.

I have attached some pics, unfortunately John and I weren’t at Phoung Hor when Feung gave the class the talk about mushroom cultivation but I do have pics of Feung with his mushrooms. Yang and Moua were with Feung so maybe one of them took pics?

The tap at the Xai Primary school was broken and some pipes blocked and broken also which John and I managed to repair so there is running water again. We are not certain how long they had been out of action but someone has stolen the balloons from inside the tanks where the kids wash outside as the interior pipes were cut and sealed off where the balloons were attached.

John bought some new fluoro lights which I installed in the toilet and shower both of which made the Policeman very happy and also provides extra lighting in what was the darkest corner at the end of the hut.

The new hot water system is a replacement of one that was only put in shortly before my arrival but the original was not working so I decided to inspect it and found that due to the way the wiring was done throughout the huts it had overloaded and blew a capacitor inside the heating unit so John bought a new one and I installed this and rearranged the electricity completely so it is now safer to use. The shower block is now also sealed from outside water as rain leaking inside and onto the unit was also a problem. Mister No may be a decent carpenter but he is no electrician.

The cat fish are huge, Tilapia not so much as they are not as fast as the cat fish when it is feed time. There were no incidences of fish being stolen while I was there but the sooner the second pond is finished and the species separated the better.

Matt left a great impression when he was there and it was definitely a legacy for me to maintain.

We got the area around the water tank Matt had installed at Phoung Hor concreted with drainage so the kids will not be creating a mud hole and mosquitos won’t breed near it.

Construction recommenced on the toilet block also which Matt had been a major part of, tiles had to be replaced because Mr. No in his finite wisdom put the wall tiles on the floor and floor tiles on the wall and wondered why tiles were breaking underfoot so there was quite a bit of money sadly wasted on buying new tiles as they all had to be replaced. The age old quote “The natives are restless” was evident as they had expected the toilet block to be well and truly completed.

John had found what we thought was just a green tree snake, everyone else was carrying on telling us to stay away from it and with his fear of snakes John had no problem doing exactly that. However, John did teach the guys the Aussie way of snake catching when he introduced them to the snake noose. Mr Moua thought it was Christmas and proceeded to catch the snake (Which turned out to be a highly venomous bamboo viper) and shove it into an empty BeerLao bottle which we then took to the Naibans shop to have fill with Lao Lao.

Ironically they told us this snake would ferment for three months in the whiskey and be used as medicine for scorpion and bug bites. The snake was still alive thirty minutes later and managed to turn itself around in the bottle sticking its head to the top for air, only stopped by some gauze which was tied around the neck of the bottle which I had to hold because of Johns phobia. Who would have thought a 6 foot tall retired Infantry Combat Veteran would be scared of a drunk snake? HAHA.

The Bio digester. This is a good source of brown gold but very little gas is being produced no matter what we tried. The locals kept telling us it was built wrong. Makes fantastic fertiliser though.

The MiVAC vehicle. Definitely needs to be replaced with something a lot more practical. It has sadly got not much longer to live. It was almost killed when on a Saturday morning when Mr Vang pulled up in it the sounds of rocks in the engine emanated from under the bonnet. The problem was quickly identified and at the cost of 1.7 million Kip was repaired and we were away again Sunday afternoon. The tyres are on the way out and are deteriorating and steering is sloppy.

I would definitely recommend to all volunteers to grab Vang, Yang or Moua and take a tour of the countryside. Especially the Plain of jars sites and tunnels. Head north to Tham Piu and see the cave that had the missile fired into it. It is very sobering.

I will have to send the photos in separate emails as the yare high resolution and quite large. 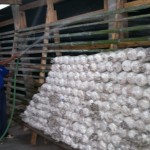 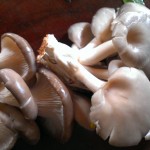 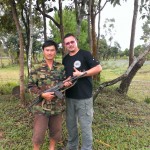 Welcome to the new site