Yang and I took Noe (our new builder) and pig “expert” , Vieng Xay Lee, from the German School to look at a pig farm about an hour’s drive east of Phonsavan.  The farm is run by Lao military and it has many of the facilities that are being planned for Ban Xai, such as:

The villagers have been busy clearing a pathway for construction of the headworks and pipeline for the new water pipe.  Two toilet rings plus lid, which will serve as the headworks reservoir, have been hauled to site using tractors.  A quantity of sand and gravel has also been taken to provide on-site concrete where needed.  The enthusiasm of the village women to participate in this project is great to see.  Some progress has been made with headworks under way with the help of the local villagers.

We were visited on Wednesday morning (9th Jan) by Chris Clifford, the International Director of Lindfield Rotary club, together with his wife Jane and a number of other people who were on tour of Lao at the time.  Chris saw the farm, the new water tanks and also the new 63mm water pipe donated by Rotary.
The new Site Managers,Bill and Corale Edwards, Yang and myself had a meeting with the District Health Director on 9th January, when we officially handed over the two ultrasound units and two Doppler foetal heart monitors.  The Director appeared to be very pleased to receive them and he was also pleased to hear that MiVAC will sponsor two of his staff to be trained in the use of the equipment.  They will investigate the cost of this training and advise us accordingly.

A Meeting with the 3 Naibans of Ban Xai was held on Wednesday, where we explained the offer to sponsor a number (not specific yet) of women to attend sewing classes at the German TAFE college.  There was much chatter over this and I got the impression that the initial response was favourable.

We took a step further on Tuesday with the nomination of women to attend sewing courses at the German college.  A total of 10 women were proposed; one from west Ban Xai, two from Hinmou Pong and 7 from Pong Hor.  All except one were Hmong people.  Corale and Yang will together select 6 who they consider to be the most suitable. 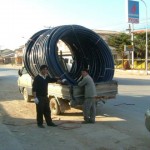 Some 63 mm pipe ready to go

Trades, Occupations,Professions and Labour for MiVAC Volunteers in Ban Xai