Toward the end of last year, my partner Hamish, my father Danny and myself joined a small group of travellers on a life-changing trip to Laos.

I was there as ambassador to MiVAC (Mines Victims and Clearance) – an organisation that commits itself to providing care and assistance to those communities that continue to suffer the effects of mine warfare in SE Asia. As a survivor of Agent Orange, this region is an area close to my heart, so it was with great pride and intrigue that I headed to Laos to see firsthand the work being undertaken by MiVAC.

Our trip was led by Steve Carroll – a Vietnam Veteran and project officer for MiVAC.  Steve went out of his way to guide us through Laos, and a more wonderful individual you could not hope to meet.

Day one involved a little sightseeing around Vientiane. Steve introduced us to the culture, customs and personalities of the Laotians – a gentle,  warm people who are always generous with their wide smiles and big, resilient hearts.  The sightseeing gave us an insight into the vast history of the region, and the heartbreaking legacy of war that has cast its shadow across generations of Laotians. One of the extraordinary locals we met on our first day was Yang, a Hmong Lao who would be our driver for the extensive road trip across the country.  Yang was a font of knowledge who gave an insightful local perspective on all we encountered on our travels.

Our first port of call was the COPE centre in Vientiane. COPE (Cooperative Orthotic and Prosthetic Enterprise) was created in response to the need to provide unexploded ordnance (UXO) survivors with the care and support they required, namely by way of orthotic and prosthetic devices.  It is a not-for-profit organisation that rehabilitates and provides support for those that have lost limbs from the hundreds of thousands of bombs that still litter the Laos land.

We spent the afternoon at COPE, learning about the kinds of devices that sit just below the surface of so many Lao communities.  Also learning about the victims, the survivors, the aid required by so many villages that have been otherwise forgotten by the Western world, who dropped many of the devices in the first place. A very sobering experience.

Day Two saw us pack up the minivan and drive 350km to Lak Xao, a dusty market town, 30km from the Vietnam border. Sitting at the base of an enormous limestone mountain, Lak Xao feels like an Asian Western film. You half expect Clint Eastwood to appear from amid the swirling dust! Lak Xao is also along the Ho Chi Minh Trail, so were using it as a base for the next couple of days’ travel to nearby villages – the bomb territory that MiVAC focuses on.

Day Three, and the time had come to take in MiVAC’s projects. Yang drove us along a bumpy unsealed road, pocked with cluster bomb craters from UXOs that had detonated.  We arrived at Koh Hai Senior School. MiVAC removed 86 UXOs from the school precinct. As a result of the school area being made safe, the population of students quadrupled to over 600 children. MiVAC then saw to it that these students were provided with sufficient dormitories, toilet and water facilities, as well as safe space to grow produce and – of course – new classrooms (this construction cost was provided by Steve).

Onto another school that is in the process of renovation, in memory of MiVAC supporter Kerry Taylor who now has her name on the school wall. As we inspected the new walls going up at the school, along with several others in the region, the children of the villages inspected us just as excitedly. They flocked to our sides and proudly showed us their classrooms and their schoolwork. It was refreshing to see that all the lessons were in keeping with traditional Lao culture. There was no Western religious or political affiliations – just pure, wondrous learning – spelling, handwriting, mathematics, art, physical education. The only major difference that stood out to me were the posters on the school walls instructing the children what to do if they came across a bomb. It was devastating to think that these incredible children – proudly showing off their schoolwork and playing joyfully in the school grounds – could end up maimed or dead with what could possibly be lurking beneath the soil. This is where MiVAC’s true worth comes into play – at the schools and villages maintained by MiVAC these children are safe.

Day Four, and a 14 hour drive through rolling red-hued ranges and across gushing rivers and dams to Phonsavan. Phonsavan will be our base for the next couple of days as we visit more villages and communities supported by MiVAC. Once again I am struck, on our long drive, by the changing landscape of Laos, and the incredible spirit of the people we meet along the way. We stop for noodle broth by the side of the road and are welcomed into people’s houses to eat, use their bathrooms and rest. It’s hard to imagine what these people – young and old – have endured. Practically everyone has lost someone to a UXO, and they are genuinely relieved by the efforts of MiVAC to see this trend is stopped. We arrive in bustling Phonsavan weary and bruised by the bumpy ride, but the scenery and people we’ve met along the way make it so worthwhile.

Day Five, and the contingent is driving 40km west of Phonsavan to a village called Ban Xai. MiVAC have set up a self-sustaining farm in Ban Xai that is growing from strength to strength. The Ban Xai region has five large unmarked minefields within it. MiVAC has cleared two, and is in the process of surveying and clearing the remaining three. They do this by gathering local ‘anecdotal’ knowledge of where suspected minefields are and then hiring detonation teams to come in and clear the land. We visit another wonderful school in Ban Xai – again, filled with children keen to show us their work and a lovely local teacher who watches over them proudly.

At MiVAC’s Ban Xai farm village, we meet Hugh, a Rotary volunteer from Lindfield Rotary Club NSW who has spent the past two months living onsite and working the land with the local community. Hugh is a beautiful, gentle Aussie, who talks us through the vast expanse of farmland he and other volunteers have nurtured so thoroughly.  On the day we were there, Hugh was testing a new bio-digester – a device that turns animal waste into methane for cooking, as well as creating compost for the farm. The farm was looking amazing when we inspected it – the living quarters were sparse, but clean – with even a couple of jars of Vegemite on the kitchen shelf. Local Lao workers were happily tending to the fields of pineapples, bananas, kasava, peanuts and corn – MiVAC teaches them new farming and building techniques, animal husbandry and educates them on environmental issues. When I asked Hugh what made him leave his loving family in Australia to live on an isolated Laotian farm for two months over Christmas and New Year, he answers quietly, “Well, why not? I live a good life in Australia. Time to give back, I reckon.”

Onto Hinmou Peung – an incredibly impoverished village across a river and up a goat track from Ban Xai. This village was heartbreakingly poor, the people obviously deeply affected by the legacy of bombs and illness. MiVAC provided the oldest man in the village with some fresh bags of rice and warm blankets. Their aim is to have the same sort of self-sufficient farm working as well in this village as it does in Ban Xai so that this poverty-stricken community can provide food and work for itself.

For us, the day ended with a trip to the Plain of Jars. A vast, incredibly stunning landscape of mysterious, ancient stone jars. It seemed a strange irony that people from around the world flock to see these mysterious Lao jars, yet remain so blind to what is sitting below the surface of so much of this country.

Day Six – our last day. Our contingent visited Bomb Village – so named because it is a village literally made from bombs. Shrapnel is used as cooking utensils, Bomb casings are used as the pillars of straw huts and pet cages. Children play hide and seek in and around the shells of wars long past. It was shocking to see such a place existed, yet it was also an indicator of the incredible resilience of the Lao people. I left never wanting to see another village like it, however. These beautiful communities have suffered enough – they should not have to live with the daily reminder of the legacy of warfare.

My, Hamish and Dad’s trip had come to an end. Our next stop was Vietnam, where I am an ambassador for another organisation that deals with the ongoing repercussions of dioxin use during the war. We bid farewell to the amazing Steve and his remaining contingent of MiVAC supporters in Phonsavan and headed across the border. I hope it won’t be too long till I return to Laos, its culture, its people. I learned so much in my time there and know there is so much more to learn. But we also have so much more we can give. These people and their land have been left living with a legacy that we were a part of.  It’s time to clean it up and give them the value of life that they and their children and the future generations of Lao deserve.

Please support MiVAC and its wonderful volunteers. I’ve seen the results first-hand and they are utterly extraordinary. 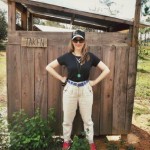 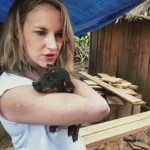 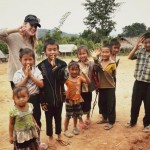 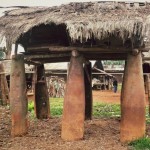 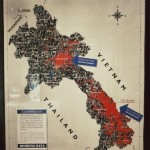 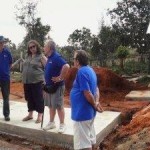 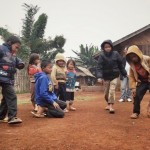 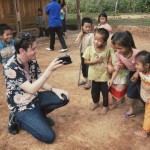 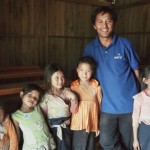 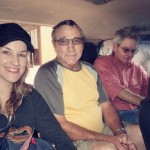 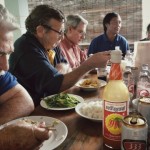 The First of Seven Lao Hmong in Australia, 1974