The project was to design and provide the materials for a pipeline from a source 4.5 km North of Ban Xai West.  The source in fact was a swampy area where three mountain ranges met. Initially it was thought that the pipe could go direct to the West Ban Xai existing (empty) concrete tank because the height difference was measured as 12 metres (with a hand held GPS done 3 times) between the source and the tank.

Charlie established all the necessary committees and we got on board the Rotary Club of Berowra, Lindfield and Crows Nest. Hugh Hamlyn-Harris from Lindfield Rotary volunteered to be the MiVAC Site Supervisor from the 14 Nov 12 – 13 Jan 13.  During this time – following previous work on the design of the pipe line system – Hugh was not only able to carry out the tasks of MiVAC Site Supervisor he also designed the head works and, crucially, liaised with Phu Bia Mining (PBM an Australian Gold Mining Company in Xiengkhouang Province) to do a survey of spot heights at the source, the tank and the MiVAC Model Farm. The accurate difference in height was 6m between the source and the tank, 12 metres between the source and the MiVAC site so that meant that the tank at the MiVAC site was 6m below the tank at West Ban Xai.

Now to another great find! Howard Sullivan from Crows Nest Rotary is a Water Expert having done many water projects in developing countries stepped forward to become involved. Howard and Sandy met and Howard calculated that a sufficient flow could be generated using a 63 mm diameter pipe between the source and MiVAC water tanks and that whilst a small (insufficient) flow could flow to the West Ban Xai tank it was best to pump water from the MiVAC Site to the West Ban Xai tank to generate sufficient flow.

Accordingly plans were made. Hugh got the head works and the tanks at the MiVAC site underway and liaised with the village Naiban to dig the trenches for the pipe whilst he would buy the pipe (with Rotary RAWCS money). This all proceeded and Hugh came back to Australia being replaced with Coralé  and Bill Edwards who continued the task.

Charlie Barnett visited the site in January 13 taking over with him an electric pump to pump the water from the MiVAC tanks to the West Ban Xai tanks.

Water is now flowing at the rate of 60 litres per minute at the MiVAC tank and the villagers, wanting to be the masters of their own destiny, have connected the pipe to the West Ban Xai tank (as well as to the MiVAC tank) and accept the smaller flow saying that for now it is sufficient.  As the demand in West Ban Xai grows then MiVAC (and the villagers) have always got a fall back position to pump additional water to West Ban Xai. Meanwhile the electric pump has other water reticulation tasks. A diagram of the water is shown in one of the pictures.

Thank you and well done to all concerned and a big thank you to Rotary and their involvement. (See the other story about Howard’s task at Hinmou Peung water and further involvement with Rotary). 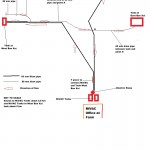 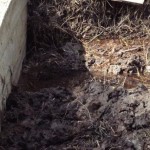 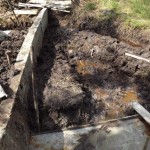 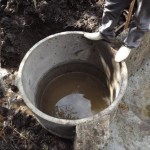 Within here is to be the inflow 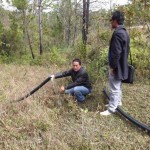 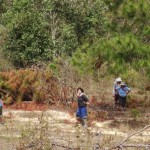 School at Pong Hor gets a Concrete Floor