The saga of the Memorandum of Understanding (MOU) commenced back in April 2012.  MiVAC thought that when the MOU was signed by the Ministry of Foreign Affairs (MoFA) in the Vientiane Government, that it was all finalised.  But … oh no !

This was when the bureaucracy and red tape continues – the Provincial MoFA becomes involved.  They go through the MOU with a fine-toothed comb and they have to add in all the Government Departments which are involved with our MOU.  We have a very different MOU to most International NGO’s (iNGO) in Lao.  Most iNGOs in Lao have a one track purpose, such as water, or education, or agriculture.  We are involved in Village Help with all three and more of these areas.

On Monday 5th November at a meeting with the Provincial MoFA Sandy asked if this MOU could be signed on 8th November (an auspicious Chinese date because of the number 8 being lucky).  The meeting was great and they said they would turn hand-springs to make it happen.

Then we found out that the MOU is not signed by the Provincial MoFA, but in fact is actually signed by the Districut of Phoukood Officials.  Once the signing of the MOU takes place, we basically deal with the Phoukood District Officials and can work (with permission) anywhere in Phoukood Province.

The signing took place at 2.30pm on Thursday 8th November in Phoukood Government buildings.  It’s a big deal.  In the photos you will see the big banner and the fact that there were 31 people altogether invited to attend.  Sandy spoke and the Secretary to the Governor of Phoukood spoke (for a long time).  Then the signing and the toast.  Was it finished yet?  No!  Now the party started, which is all part of the signing.   So we adjourned to a restaurant where we had dinner and drinks.  All in all a great day and I believe that MiVAC has made some really good progress in Phoukood. 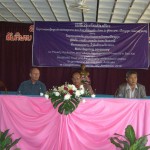 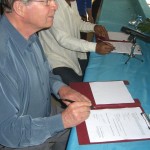 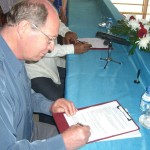 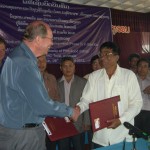 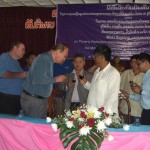 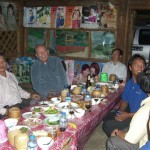 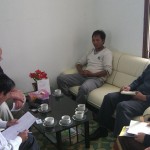 The Biodigester and it’s Challenges.