A growing school population led to the need for new toilets, a clean water supply and permanent accommodation to replace the ramshackle cubby houses that students who lived far from the school constructed for their overnight stays.  One area in which the students were active was in planting cornfields and fruit trees to boost their food sources.

In May 2010, Steve Carroll and his wife Dorene, travelled to Ko Hai to clarify what was needed. As a result of this visit plans were drawn up for new accommodation to house eighty students.

Steve, together with his daughter, Natalie returned to Lao PDR in November to implement the project.  Accompanied by an interpreter, On Keo, Steve and Natalie journeyed to Lak Sao, the nearest accommodation to Ko Hai, on 20th November.

Initial setbacks included no site preparation or materials acquisition by the school staff.  These hurdles were soon overcome when Steve’s presence reassured locals of the sincerity of MiVACs intentions and Steve’s resolve for the project to be completed within three weeks. 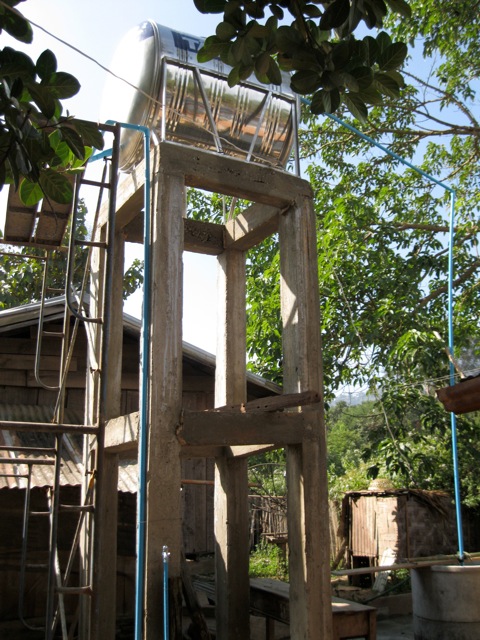 Some building materials were procured at Lak Sao but timbers were milled as required at Ko Hai to channel as much of the building cost into the local community. Once the school staff accepted that the project was to go ahead they all joined in with local builders to turn the plans into reality.

The project was completed by 9th December with a four metre water tower replacing the planned well.  The tower gave pressure for the water to flow to two new toilets and two dormitories built to accommodate eighty students.

Following an initial survey by Steven and Dorene Carroll after clearance of UXOs from Ko Hai school;s playground, it was decided to return to the school to construct additional facilities to cope with the increased school population that resulted when parents felt safe to send their children back to the school after it was declared clear of UXOs.

Construction planned was for:

On site it was decided not to proceed with the construction of the kitchen and that the well would be replaced with a four metre water tower.

Before the project was commenced several steps were coordinated with the school principal and staff.  These included design of the accommodation buildings and the toilets.

During this phase, school staff requested the planned well be changed to a water tower to enable water to flow to the toilets with sufficient pressure to refill the water reservoirs.

Despite previous arrangements to have materials on site and foundations prepared by the time Steve arrived, none of this preparatory work had been undertaken before Steves arrival.

It was proposed that all materials be purchased as close to the school as possible to ensure that inflow of funds to the local economy was maximised.  Moreover, as much of the work was to be undertaken by school staff with the aid of local villagers to ensure ownership of the improvements vested with locals.

All structural goals were achieved within budget and on schedule.

Completion of the project coincided with a nine year festival so the hand over on completion attracted attention from villagers of many nearby villages who had journeyed to Ko Hai for the festival.

Social goals of passing responsibility for construction to local villagers were exceeded by the response from school staff, students and district / provincial officials.

The rapport established with the school through demining has deepened with the completion of this current project.