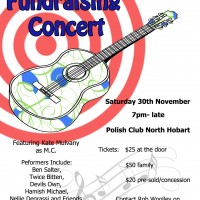 November 14, 2013 in Events
Children, grandchildren and friends of Vietnam Veterans are performing at a  concert in Hobart on Saturday, 30/11/13 which will raise funds for a project in Vietnam.
Kate Mulvany is MC for the evening.  The daughter of a Vietnam Veteran, Kate has written over 20 plays including her award-winning autobiographical piece “The Seed”, which dealt with her life as an Agent Orange survivor and her father’s involvement in Vietnam.  “The Seed” has toured Australia to critical acclaim and is currently in development to become a novel and a film.
Kate is also an actor and has been nominated for many acting awards, including the Sydney Critics Award for Best Female Actor for “The Seed” and a Green Room Award for Best Female Actor in “Killer Joe”.
On television, Kate has appeared in “All Saints”, “Blue Heelers”, “The Chaser’s War on Everything” and many other productions. Her film work includes Baz Luhrmann’s new version of “The Great Gatsby”, playing Mrs McKee.
Ben Salter, also the son of a Vietnam Veteran, is best known as a founding member of The Gin Club, Giants of Science, and the Wilson Pickers. A Brisbane based singer-songwriter, Ben has been a solo performer in his own right for over ten years.  He has played throughout Australia and Europe.  His most recent trip to Tasmania included taking part in this year’s DARK MOFO festival in Hobart as part of the Vandemonian Lags project.
Local Hobart groups include Nellie Degrassi & friends, and Twice Bitten, Rhian and the Old Man, Craic Pot and  Devil’s Own.  Mat Woolley who performs in Twice Bitten with Annie Parsell,, is the “Old Man”  as well, accompanying his daughter, Rhian – a family folk duo.  Both Mat and Nellie are the children of Vietnam Veterans.
The night will be jam packed with many artists all drawing on a common passion to donate their time and raise funds for worthwhile projects – assisting MiVAC in their work to provide support for victims of landmines and Agent Orange.
MiVAC is looking  at a partnership with several other like minded charities and individuals, who are dedicated to building a home for children with severe disabilities in Vietnam . Many of these children have been affected by exposure to chemicals, such as Agent Orange,  which was used in Vietnam during the war.
,
Merle Woolley