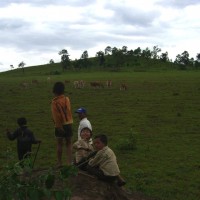 New Use For Minefield

The month was June – June 2013. It was late in the afternoon and Yang drove me past the Pong Hor school, past the Police Agricultural buildings and then I spied it.

That’s right the area around the Khangpunghor Minefield had been fenced. I looked towards the old minefield that MiVAC had contracted PCL to clear with a team of people selected from Greater Ban Xai (who were trained by Paul Miles (Smiley) to be Mine Clearance operators) and saw over 100 cows.

I was excited – this is the first time that I witnessed the ground being grazed.

We went towards a group of young Hmong boys playing with their spears and asked questions – they were really shy! Here are some answers:

* The boys were there to collect the cattle and take them to their night pens.

* The land belonged to someone in Ban Xai.

* Money was paid for grazing the cows.

* The cows grazed all the way to the top of the hill (this is where the Minefield was).

* The cows were all owned by the people in Pong Hor.

That’s all great news – MiVAC made a difference. Yang will get back to me sometime because I wanted to check all the answers we received. 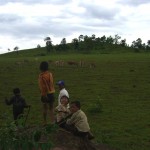 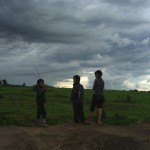 2 Responses to New Use For Minefield – Sandy MacGregor